An outstanding national treasure ! Via Vitae (Way of Life) by Joseph Chaumet 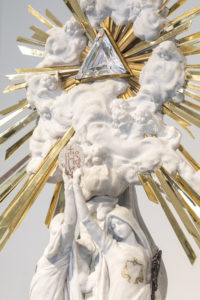 On the occasion its re-opening, and thanks to the participation of the Fonds du Patrimoine, the Fonds Régional d’Acquisition
des Musées, and to a campaign of cultural sponsorship, the Museum acquired a fabulous National Treasure: the Via Vitae, or Way of Life (1894-1904) by the Parisian goldsmith and jeweller Joseph Chaumet (1852-1928).
Up until 1993, the Via Vitae had been on exhibit in the premises of the Chaumet jewellery store in the Place Vendôme in Paris and could only be admired by a privileged few. In 2000, it was listed as a National Treasure; the ministerial decree has enabled this  magnificent artwork to remain in the public domain as an object of major interest for the national heritage.
The monumental work, executed in precious materials, stands ten feet high, is ten feet in width, and weighs some three tons. It is a gigantic piece of gold and silversmith work. One hundred and thirty-eight gold and ivory figures represent scenes from the life of Christ; the Trinity in glory is depicted in patinated silver gilt and rock crystal; the Eucharist appears in diamonds and rubies; different coloured marbles, alabaster, jasper and gilt bronze form the plinth and the background decors in each of the scenes.
It evokes the principal episodes in the life of Christ: the Nativity, Jesus among the Doctors,The Sermon on the Mount,The Wedding at Cana,The Resurrection of Lazarus,The Last Supper, The Garden of Olives, The Flagellation of Christ, Calvary, The Resurrection, culminating with the Eucharist borne aloft by two allegorical figures. The nine groups of figures stand on the slopes of a mountainside which is made up of eighteen blocks of blue-grey marble, some of which weigh almost 700 pounds, and had to be assembled together to create the work.These blocks of Pyrenean marble are surrounded by alabaster, representing clouds.
Mystically inspired, and in reaction to the ambient anti-clericalism that characterised much of late 19th-century France, Chaumet sought « an attempt to artistically represent, using precious metals and stones, mankind’s notions of God and the nature of God, of Man himself and human nature, of human being’s mutual relationships, and their own relationship with their Creator ».
This magnificent work by Joseph Chaumet, the creation of which coincided historically with that of the Musée Hiéron itself, adds a harmonious balance to the museum collections, in a blend of astonishing perspective and intense moments of contemplation. 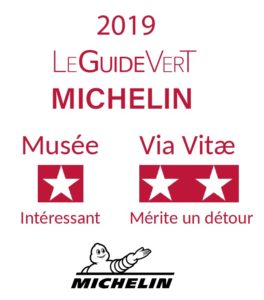